” Let the little children alone, and do not stop them from coming to me ; for it is to such as these that the kingdom of Heaven belongs ! ” (Mt 19,14)

to the Little King of Grace

After twelve years of marriage, King Louis XIII and Ann of Austria were still childless. Marguerite of the Holy Sacrament, in the depths of her monastery of Beaune, was praying for France. Now, during a stormy night, the King took refuge in the Louvre where the Queen stayed and that is how the future Louis XIV was conceived.
But the young Carmelite would remind the world that the real king is not the Sun-King, but Jesus Christ! In those times of wars and miseries, Marguerite, whose size would never exceed that of a twelve-year old girl, was chosen to spread the spirit of childhood worldwide; for from the Crib to the Cross, from the Little King of Grace to the King crowned with thorns, Jesus wishes to reign over our hearts. 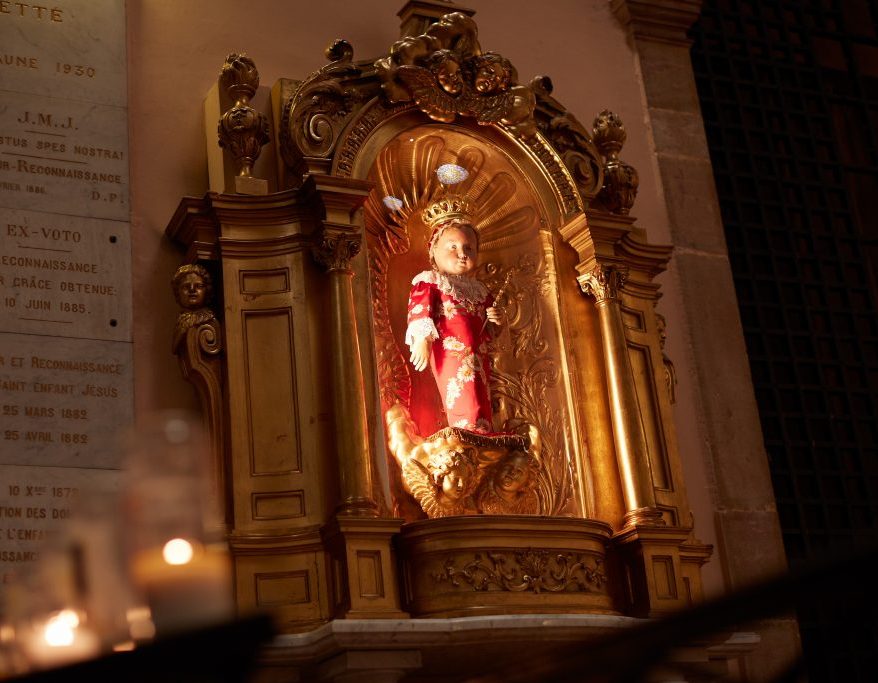 Some landmarks in the Carmelite Monastery’s history

On February 7th 1619 in Beaune, Jeanne Bataille, Pierre Parigot’s wife, gave birth to her fifth child. She will have two extra babies after Marguerite’s birth. This deeply Christian couple lived comfortably on their land and vine revenues. Little Marguerite was baptized on the same day. Six months later, an important event occurred: the nuns of Dijon’s Carmelite convent, founded in 1605, opened a Carmelite convent in Beaune after many efforts and difficulties. Indeed the Canon who sold Saint Stephen’s Priory to the Carmelites was Marguerite’s great-uncle. Thus he set down one condition for this transfer to be possible : that his niece was to be welcomed to the monastery as a “founder” when she was old enough !

Vocations were prepared exactly in the same way as arranged marriages. Marguerite could have rebelled to be forced to enter the cloister ! Yet the Holy Spirit would fall upon this child’s soul and would lead her precociously to a surprising spiritual maturity.

« When everything will be consumed, the Infant Jesus will draw me to him »

She was kind, docile and graceful, and on top of these natural gifts she experienced a growing devotion to the Lord. At the age of five, the Holy-Sacrament attracted her like a magnet and she secretly offered herself to God. Sometimes the church was so cold that she thought she would faint, still the Holy Spirit was present and wrapped her into a mild coat of warmth enabling her to continue her prayers. Advanced for her age too and supernatural, her heart thrilling in tenderness, she was attracted by the poor who were so numerous in those times of wars and epidemics. She accompanied her mother in her visits to the sick and overcame her loathing of the poor souls by changing their stained dressings. Jesus’s destitution she contemplated in the crib made her feel revulsion for wealth, fine clothes and subtle dishes.

You can find out more about which cookies we are using or switch them off in settings.

This website uses cookies so that we can provide you with the best user experience possible. Cookie information is stored in your browser and performs functions such as recognising you when you return to our website and helping our team to understand which sections of the website you find most interesting and useful.

Strictly Necessary Cookie should be enabled at all times so that we can save your preferences for cookie settings.

If you disable this cookie, we will not be able to save your preferences. This means that every time you visit this website you will need to enable or disable cookies again.

This website uses Google Analytics to collect anonymous information such as the number of visitors to the site, and the most popular pages.

Please enable Strictly Necessary Cookies first so that we can save your preferences!